Through the lens: using photography to tell science stories - IndiaBioscience

Sixteen researchers, eight days, four stories, two instructors; the Shoot for Science workshop that recently concluded was the brainchild of molecular ecologist turned science-photographer, Prasenjeet Yadav. Co-organised by Anand Varma, a National Geographic photographer based in the US, the core focus of the workshop was on science communication. While scientists pursue questions with a passion, few others have an insight into the scientific process. The language scientists use is often technical and the excitement of science gets lost in jargon. Efforts to bridge this gap are of vital importance—they inform a wide audience about the successes and impacts of science, increase scientific literacy and inspire young students. Effective communication requires time and creativity. The first step is to capture the attention of the audience. Few media achieve that first step more successfully than photography.

The aim of this unique workshop, Shoot for Science, was to enable scientists to tell the story of their science to a wide audience using photography. Training scientists for the job was a natural choice—it would be easier to equip a scientist with the tools and know-how of photography; they already have a deep and personal insight into the process of science.

Supported by funding from National Geographic Society and hosted by the National Centre of Biological Sciences, Bangalore, the workshop began with an introduction to the basics of photography. Armed with cameras provided by Nikon, and an array of lighting and miscellaneous accessories, the participants subsequently worked in groups to develop photo stories around research done by scientists at NCBS. Here is the story of the workshop told in a series of photos, interspersed with some of the stunning pictures produced by these newly-minted science photographers.

(Images credited to ‘Shoot for Science’ were taken behind the scenes. The ones credited to different teams are images taken by the participants during the course of the workshop.) 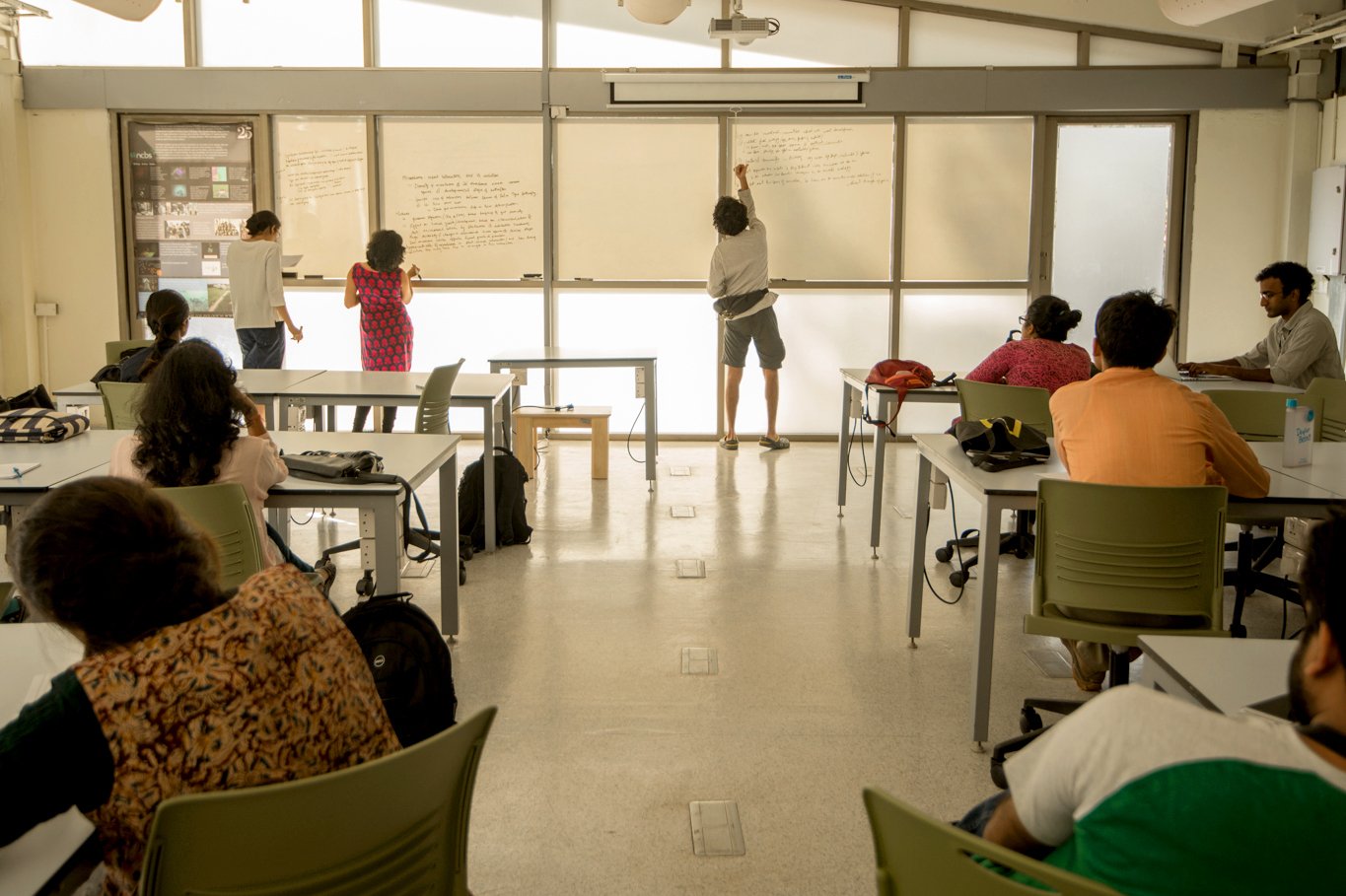 The first day began with a crash course on camera basics. Technical tricks aside, it was the story that was of central importance. To this end, participants spent the afternoon listening to talks from 4 scientists at NCBS. Their first major exercise was to distill the science and draw out stories that could be told using images. They each proposed possible shot ideas that were refined in the following days. Image credit: Shoot for Science 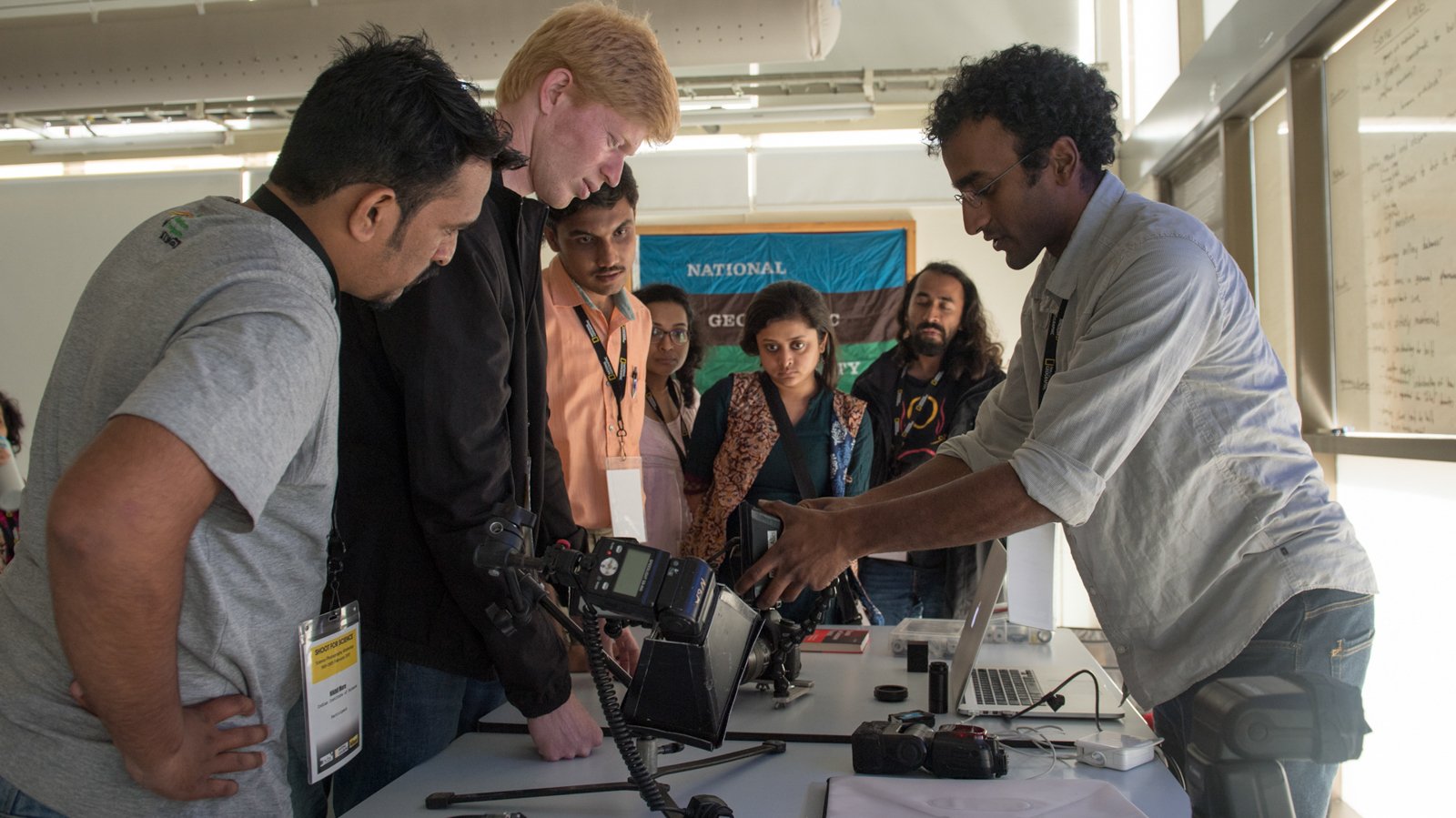 Expert tips to help get the light just right: Anand Varma teaches students the application and importance of lighting techniques and how lighting can be used to highlight a particular scientific process in science photography. Image credit: Shoot for Science 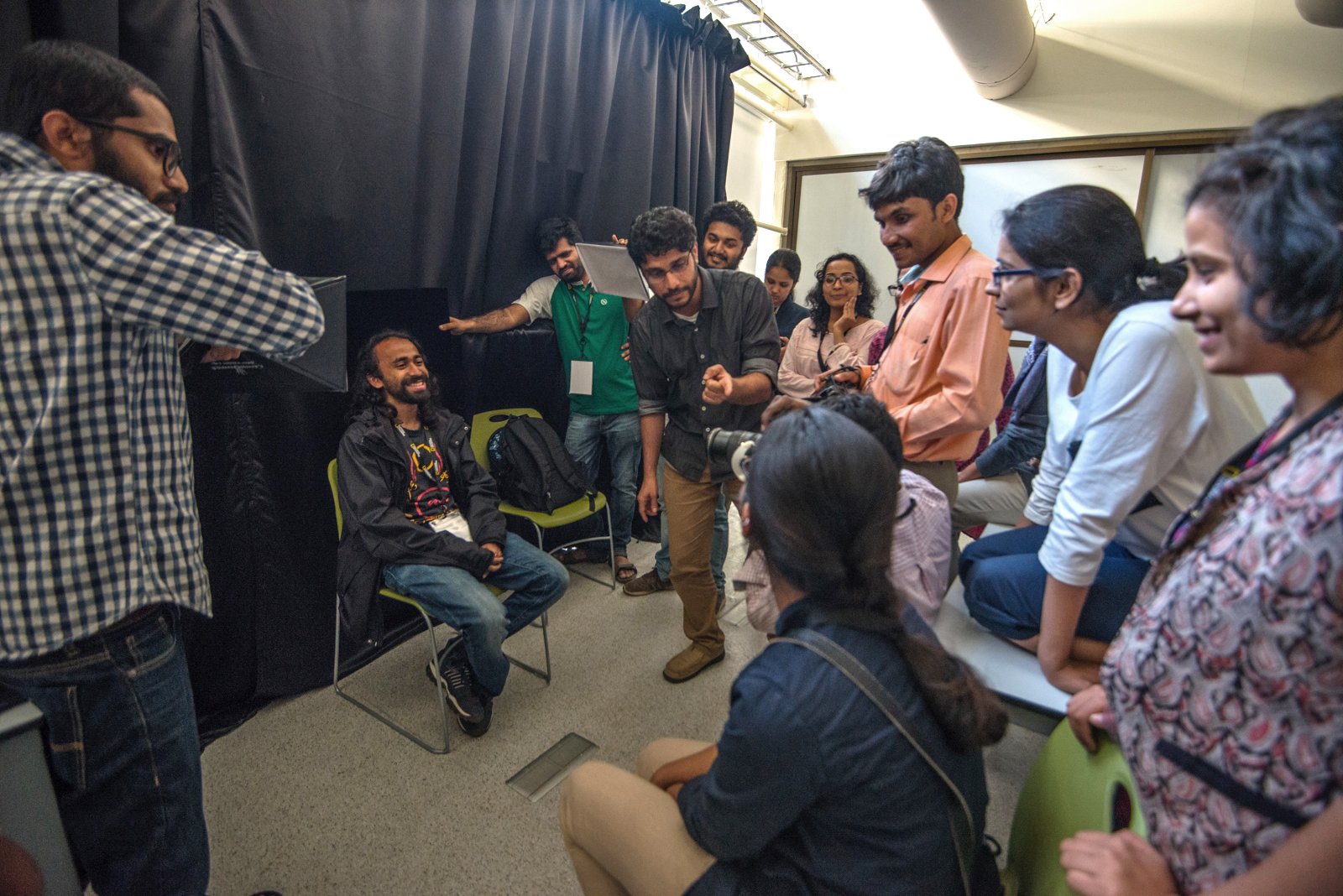 Morning sessions on subsequent days were dedicated to hands-on sessions on lighting and composition. Prasenjeet Yadav helps students understand how the direction and intensity of the light source affect the final image. Image credit: Shoot for Science

Microbes in the spotlight 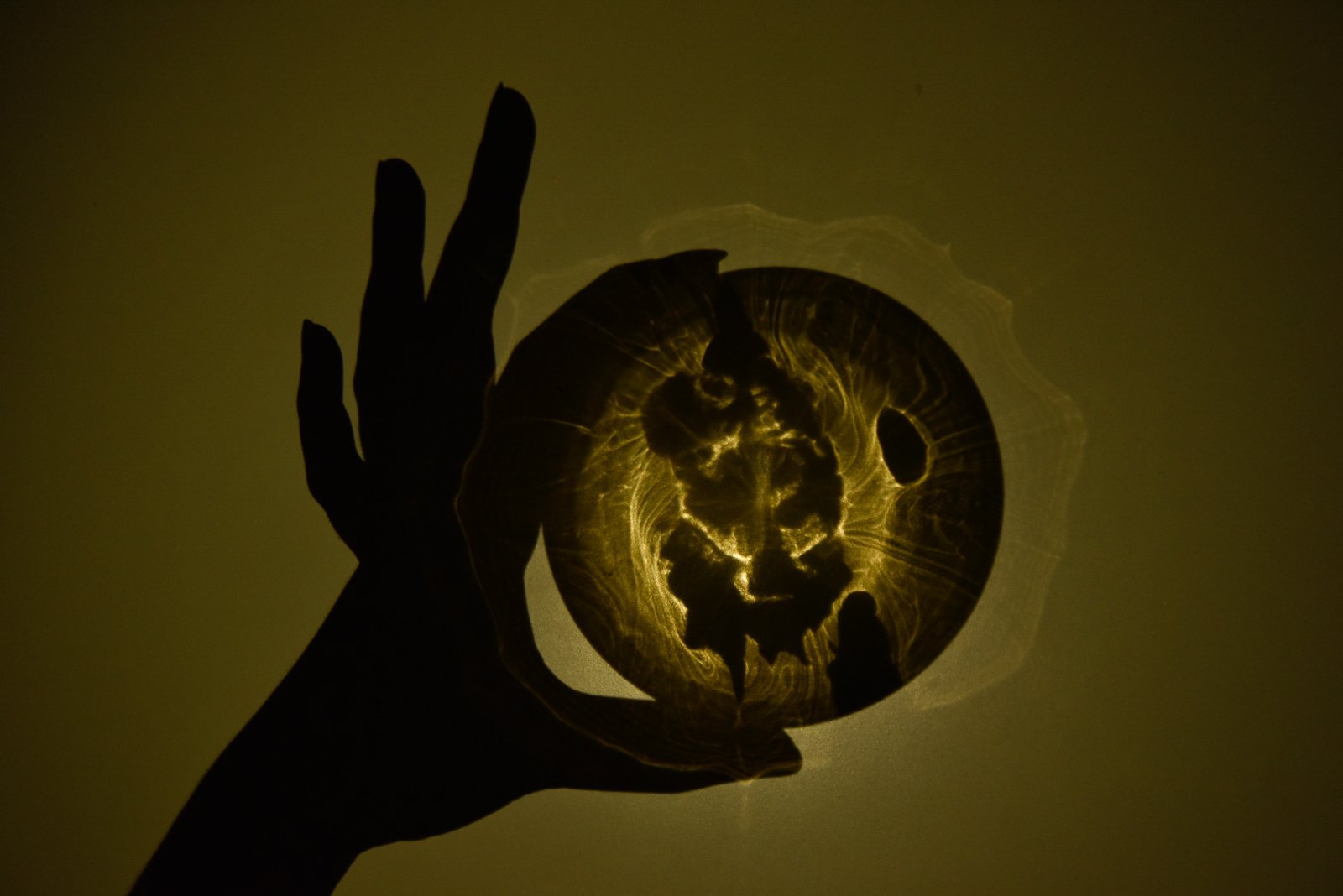 A simple light source is used to create a compelling shadow of a bacterial colony in a Petri dish containing growth medium on which a leaf pattern has been imprinted. The swirl patterns come from the cooling of medium and glass plate as it solidifies. Do these microbes play a beneficial role in butterfly growth and development? That’s the question being pursued in the Agashe lab. Image credit: Team Agashe 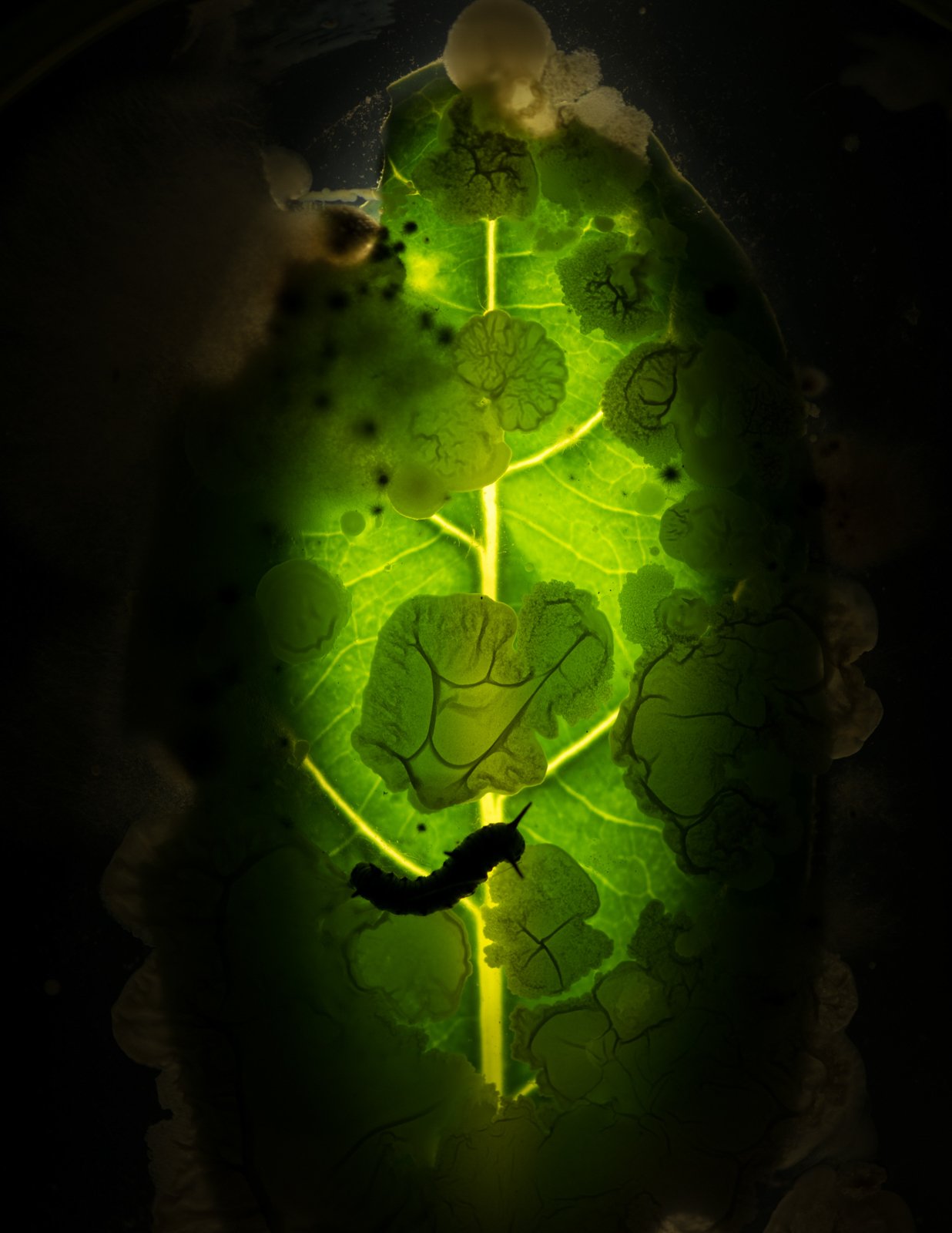 Here, a plain tiger larva feeds on milkweed leaf. The leaf is placed in microbial growth medium to show abundant growth of microbes. This representational image suggests that the larvae feeding on the leaf eats the bacteria too; this may be essential for its growth and development. Image credit: Team Agashe 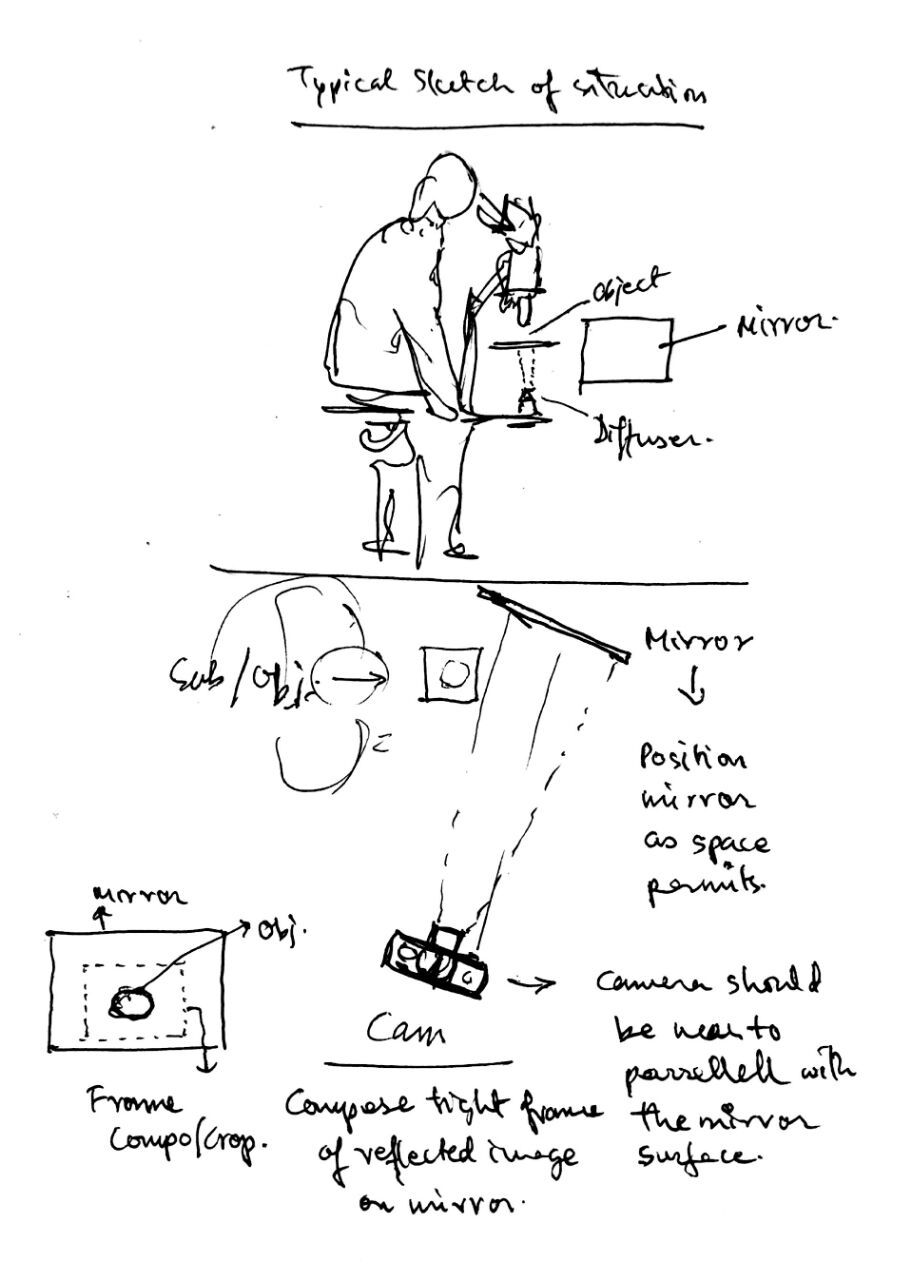 Challenged to compose a shot in a cramped space, Sukanya Olkar devised a setup involving mirrors. To clarify whether it would work, she scribbled it down to share with Anand Varma. “I like to plan setups too, mostly in my head because I can’t draw very well. Sukanya came up with an idea and made a good doodle too, an easy and visual way of checking whether a shot is feasible,” said an impressed Varma. Doodle credit: Sukanya Olkar 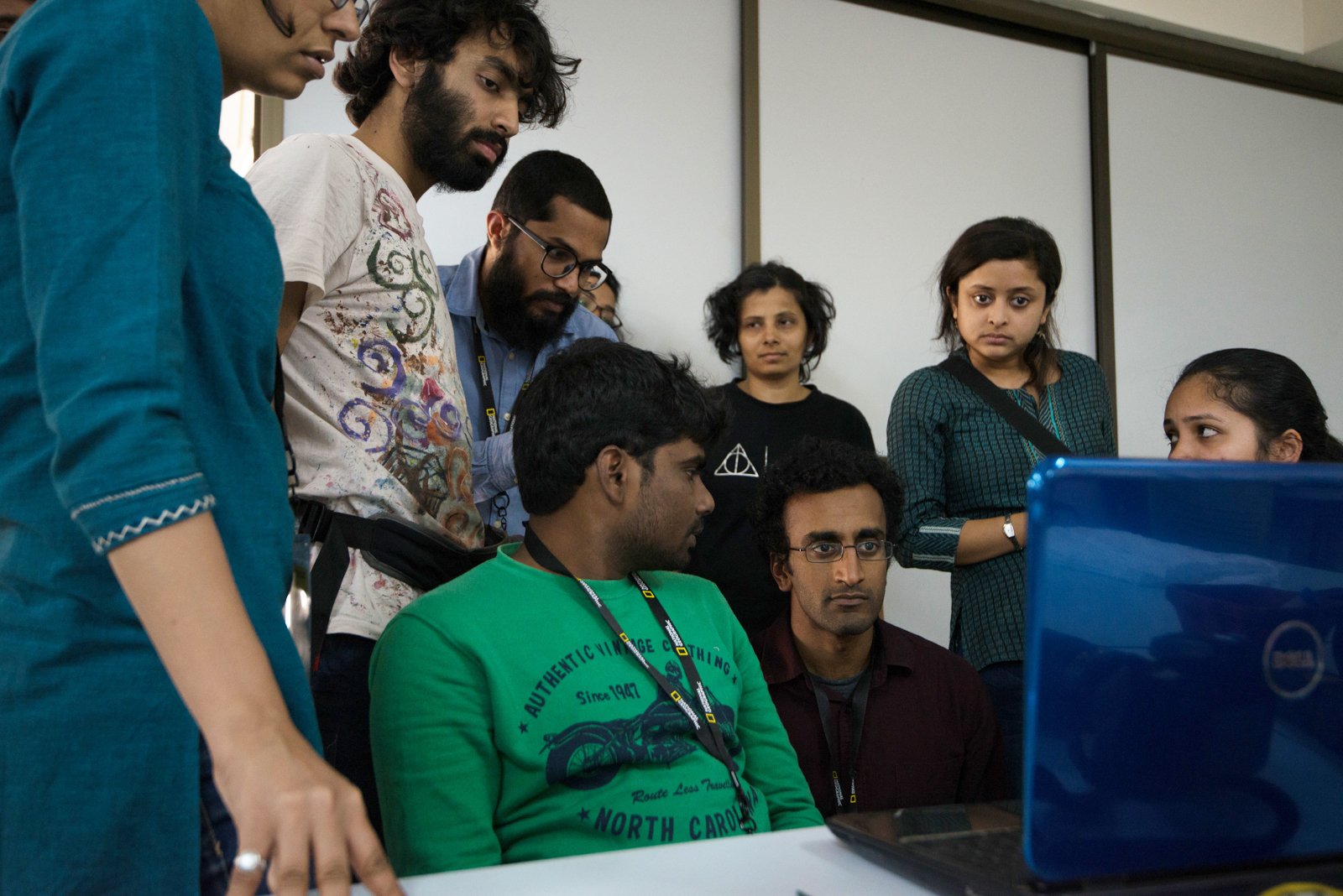 A lot of importance was given to sharing ideas and getting feedback from colleagues during the workshop. Here, participants review and assess their shots, with inputs from Anand Verma. “I liked the review sessions where each team presented their images, which were discussed at length in terms of composition, technique, and the idea that was being conveyed. Every time new ideas to improve the image used to pop up,” said one of the participants, Sarah Iqbal. Image credit: Shoot for Science 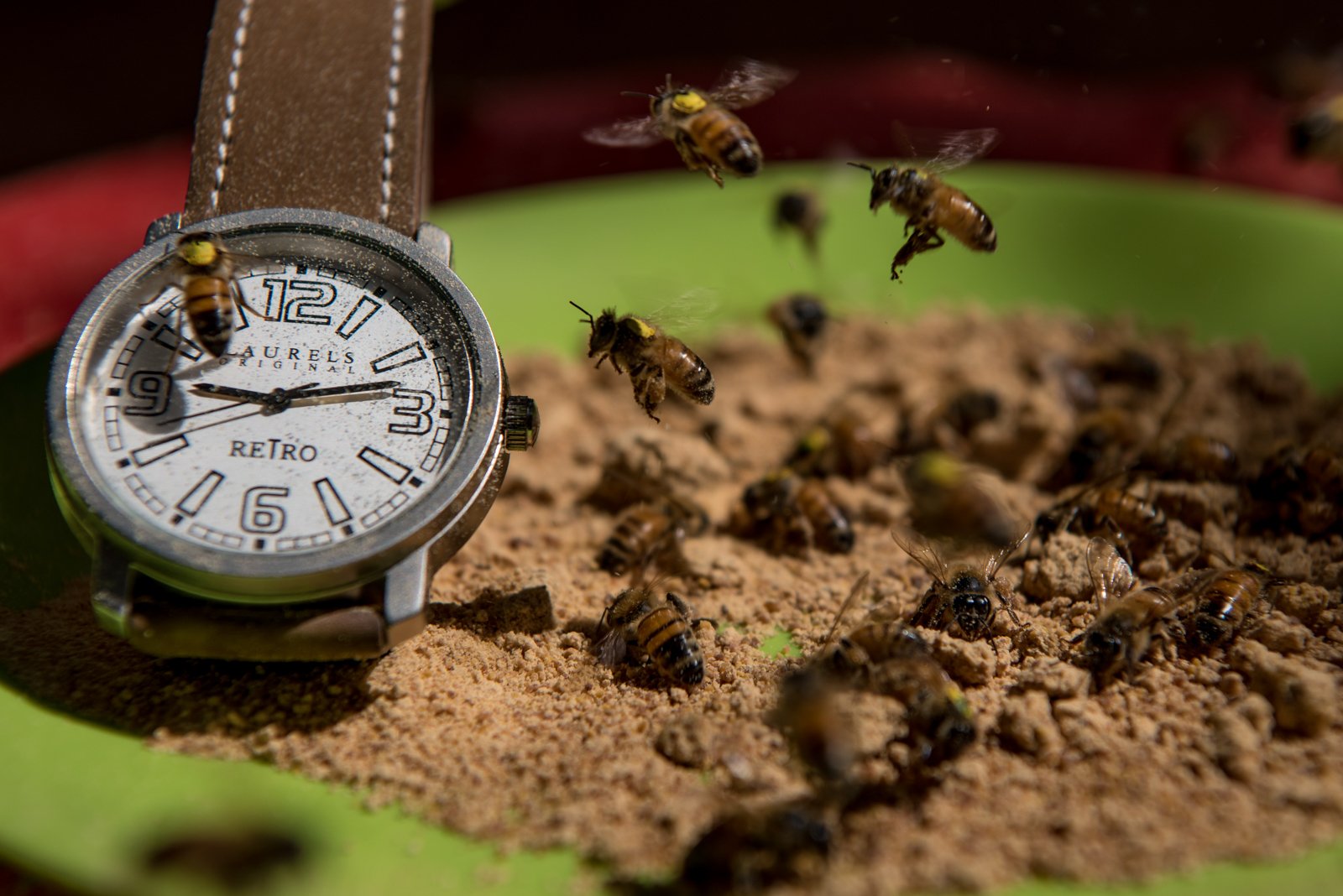 How do bees keep time? Do factors other than light affect their central clock? In particular, a student from the Brockman lab asks whether different food sources have different effects on the clock. The most critical element of science photography is story. This picture tells it all in a single frame. Image credit: Team Brockman

The art of storytelling 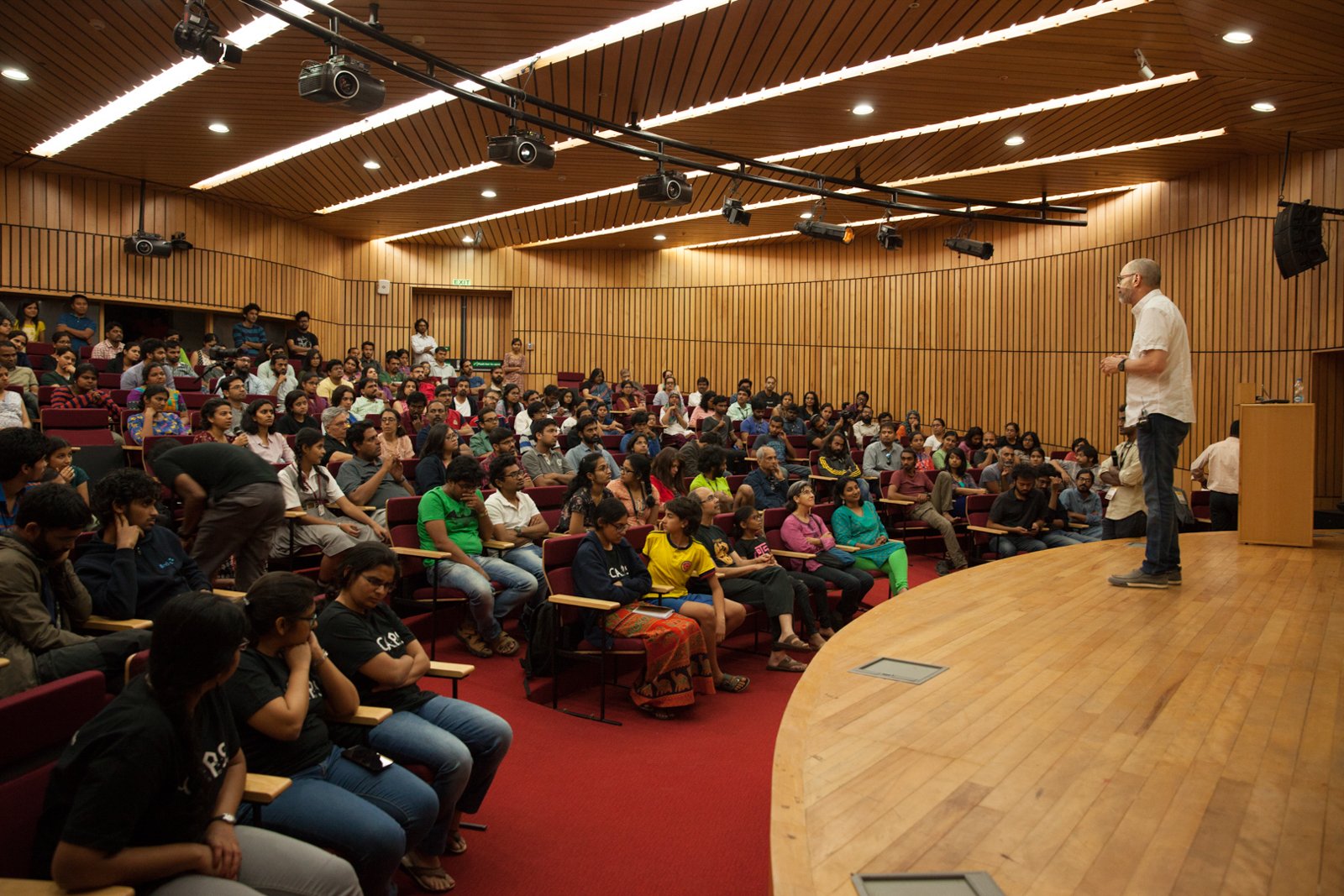 Kurt Mutchler, senior science photo editor at National Geographic, narrates the stories behind the alluring photo stories he has crafted for the magazine, to a captive audience at Dasheri Auditorium, NCBS. He also shared an editor’s perspective, giving insights into elements that help shape an engaging science story. Image Credit: Shoot for Science

The process of science 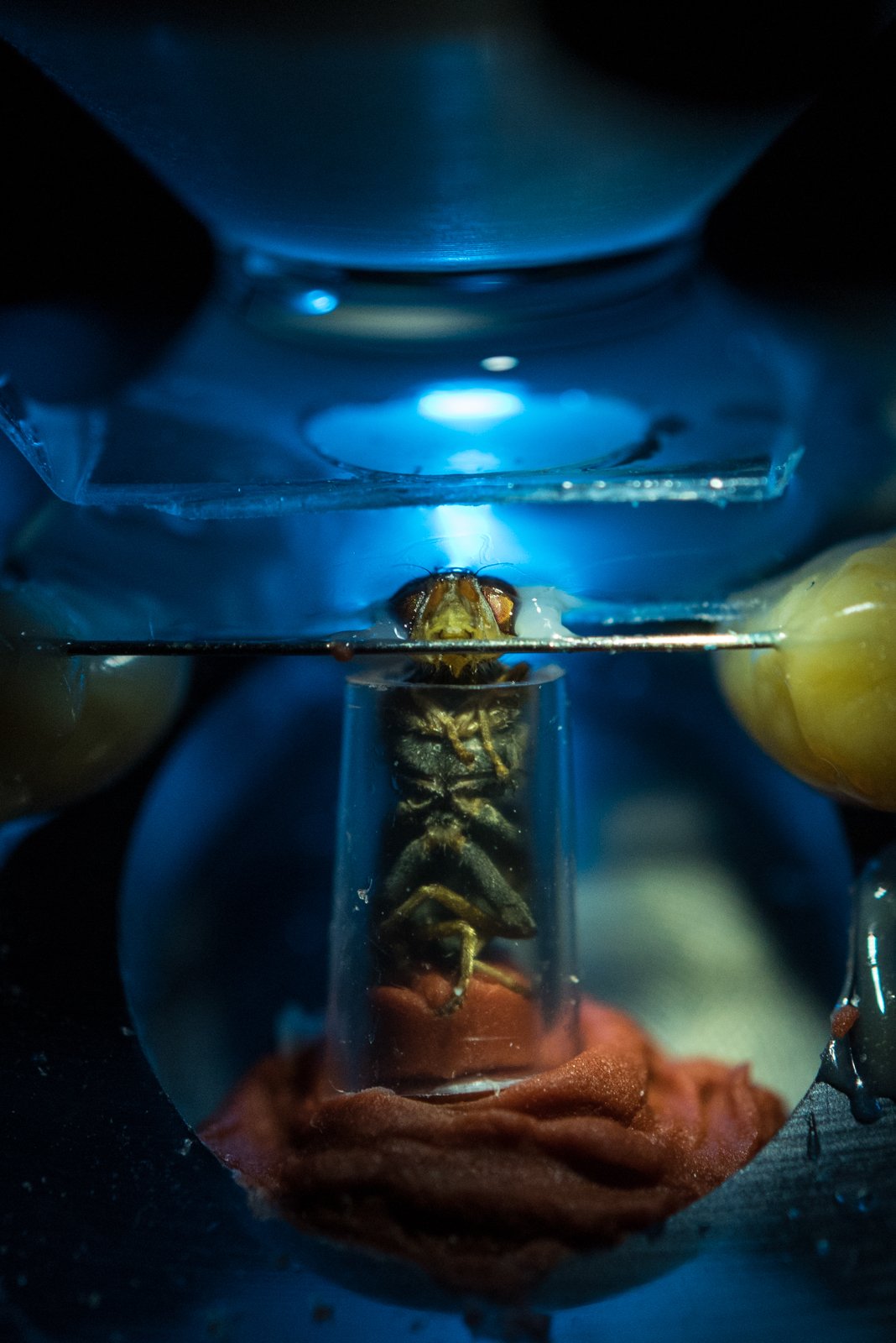 A lot of science communication focusses on results and findings. It is as important to talk about the process itself—the tools, methods, experimental design, measurements and analysis that go into building and verifying a hypothesis. Shown here in this image is the set-up for imaging the brain of a living apple maggot fly. Formerly fans of hawthorn berries, the apple maggot flies evolved over time to like (and infest) apples brought to the US by foreigners. The Olsson lab has new insights into how a crossing of wires in the brains of these flies correlates with a preference for the smell of apples over hawthorne berries. Image Credit: Team Olsson

Screen within a screen 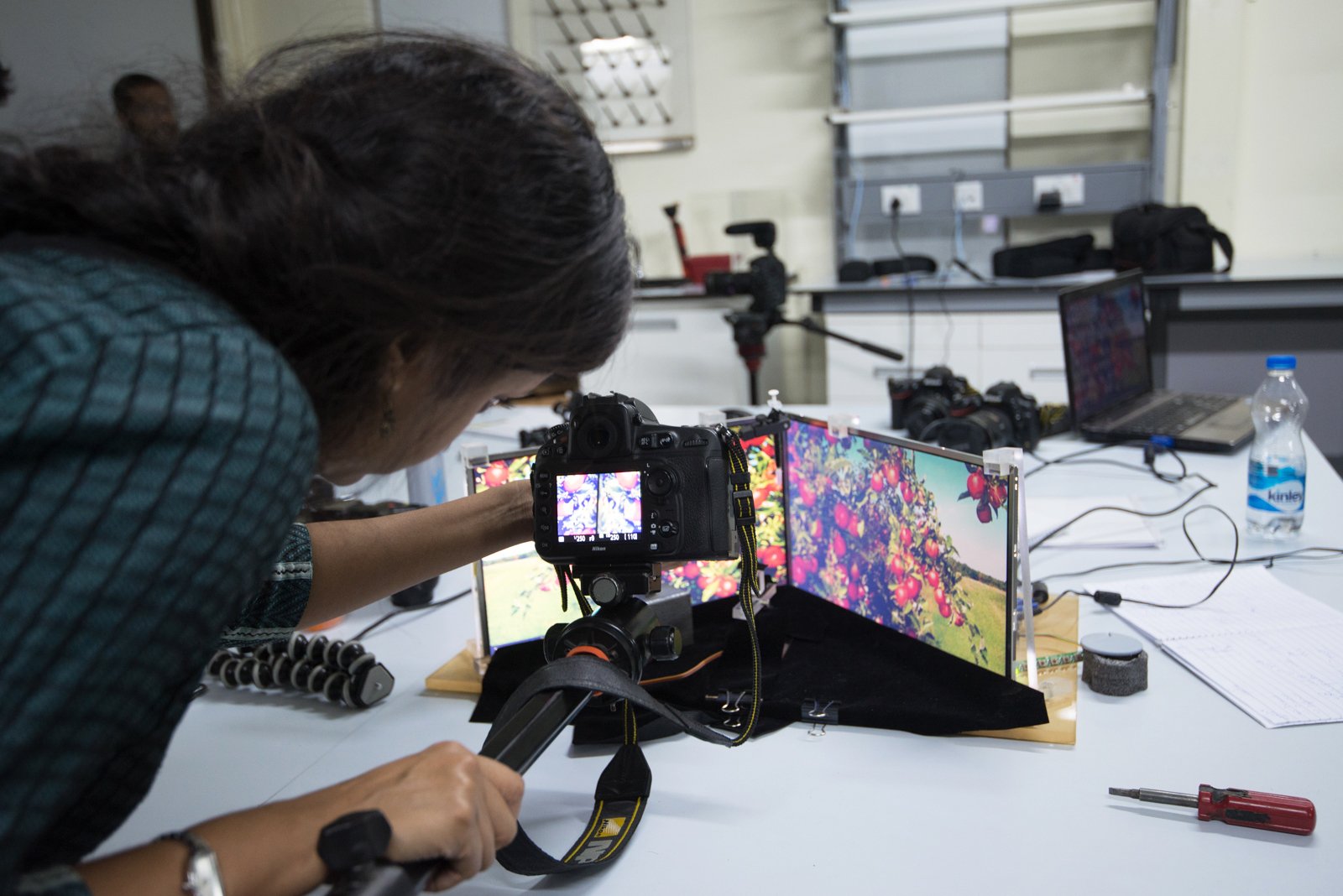 Parijat, one of the participants takes her time composing her picture of a virtual reality set up constructed by the scientists in the Olsson lab. Image credit: Shoot for Science

The apple of its eye 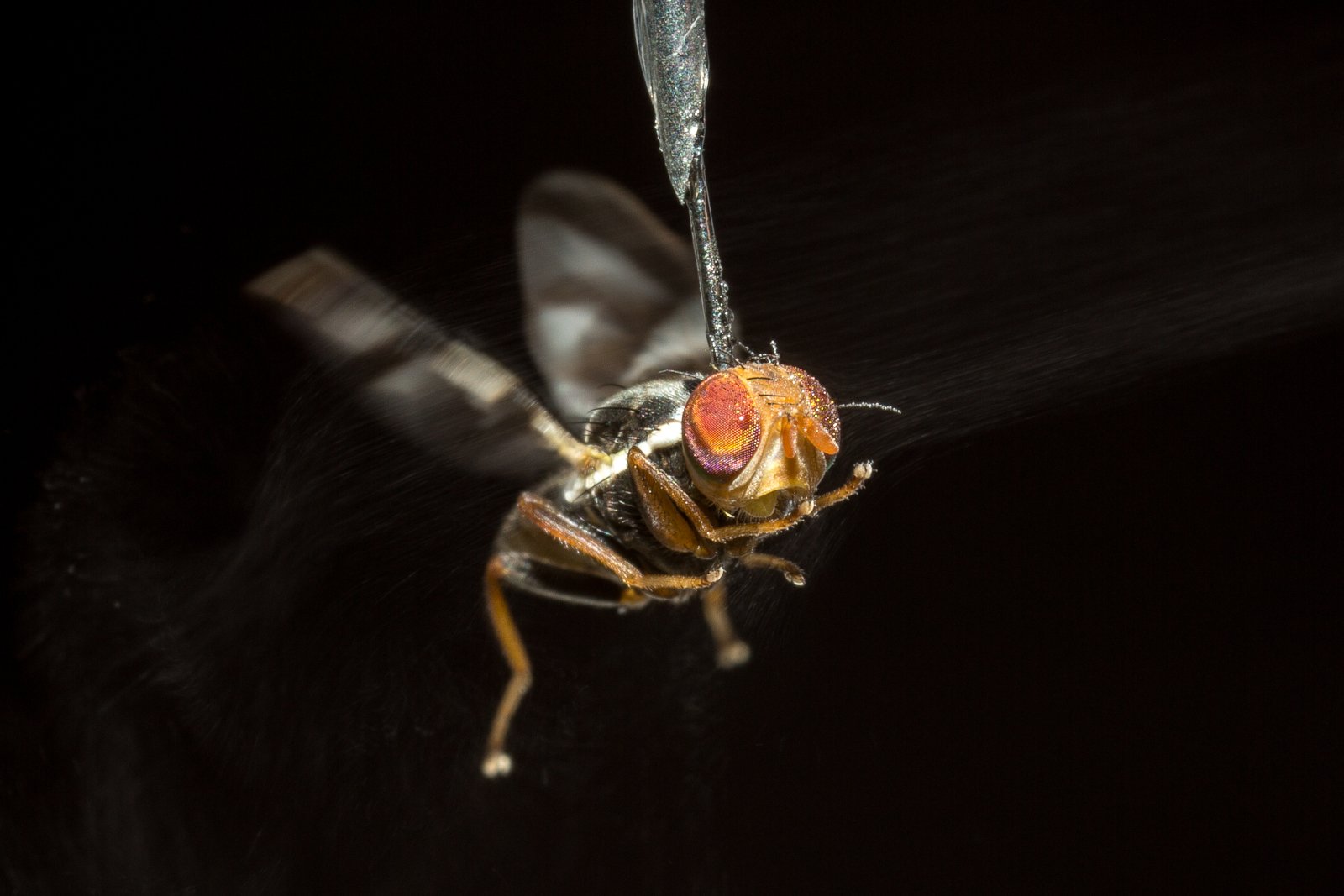 Glued to a tether by its neck, an apple maggot fly zooms around in a virtual meadow filled with its favourite apple trees. The scientists monitor wingbeats as it flies around to understand how the flies visually locate apples in a large meadow. Image credit: Team Olsson

Where the science happens 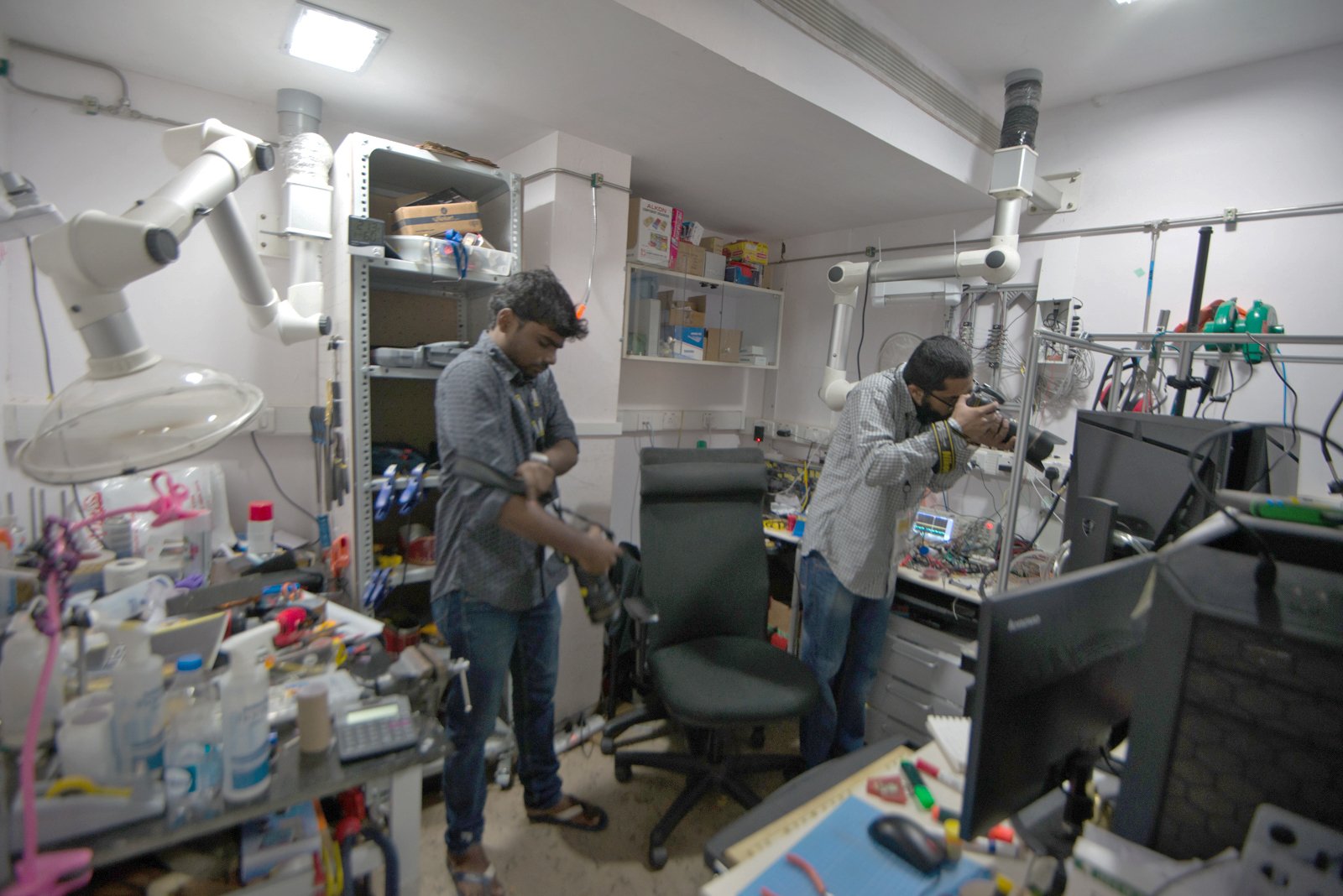 Pictures taken in a lab give a glimpse of the arena where all the excitement unfolds. Here, the photographer is seen sharing space with a clutter of equipment and furniture to catch the experiments as they happen. Image Credit: Shoot for Science 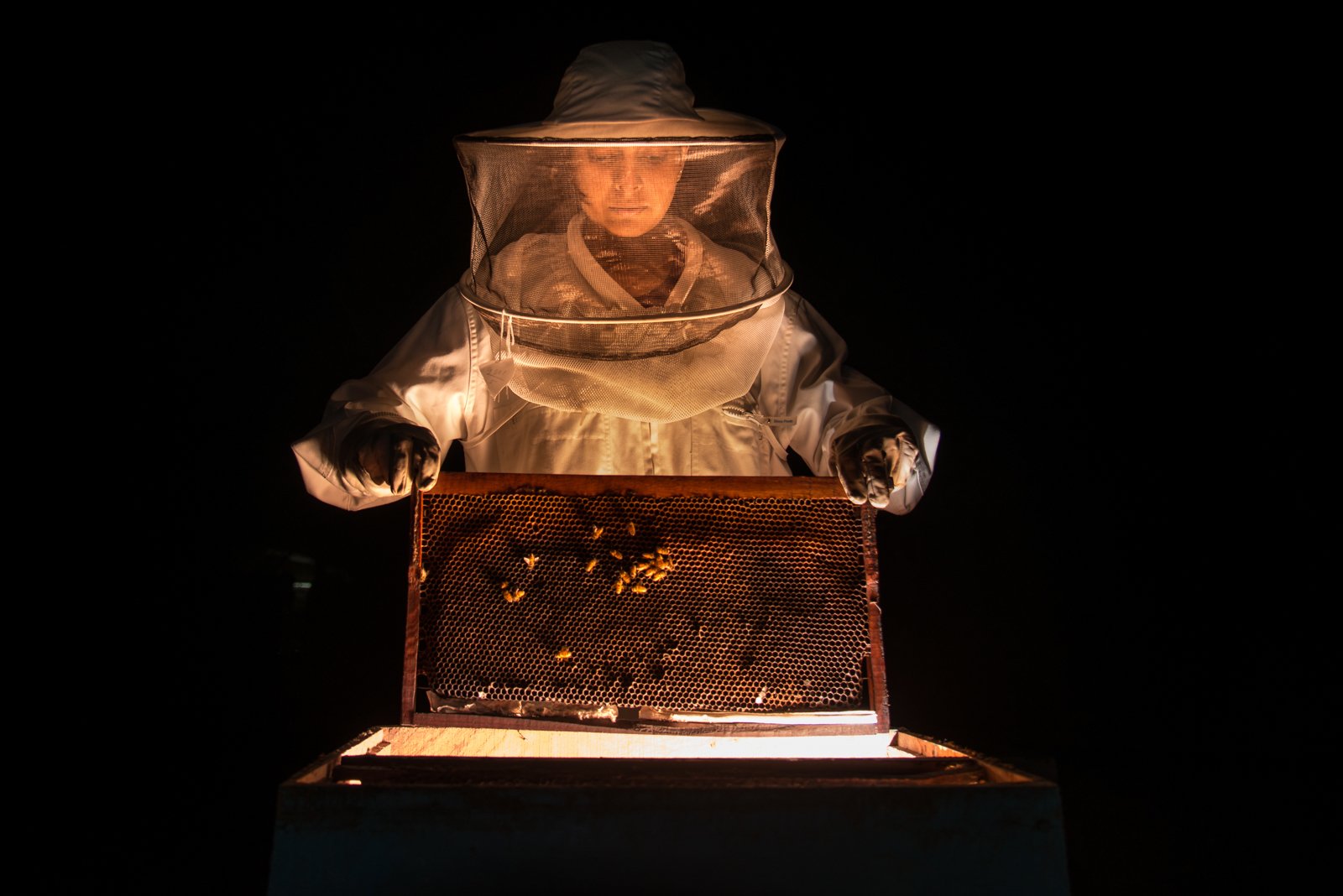 Capturing bees at night hours to track down certain chemicals that influence behaviour and analyse whether they have a role in timekeeping. Image Credit: Team Brockman

Out in the field 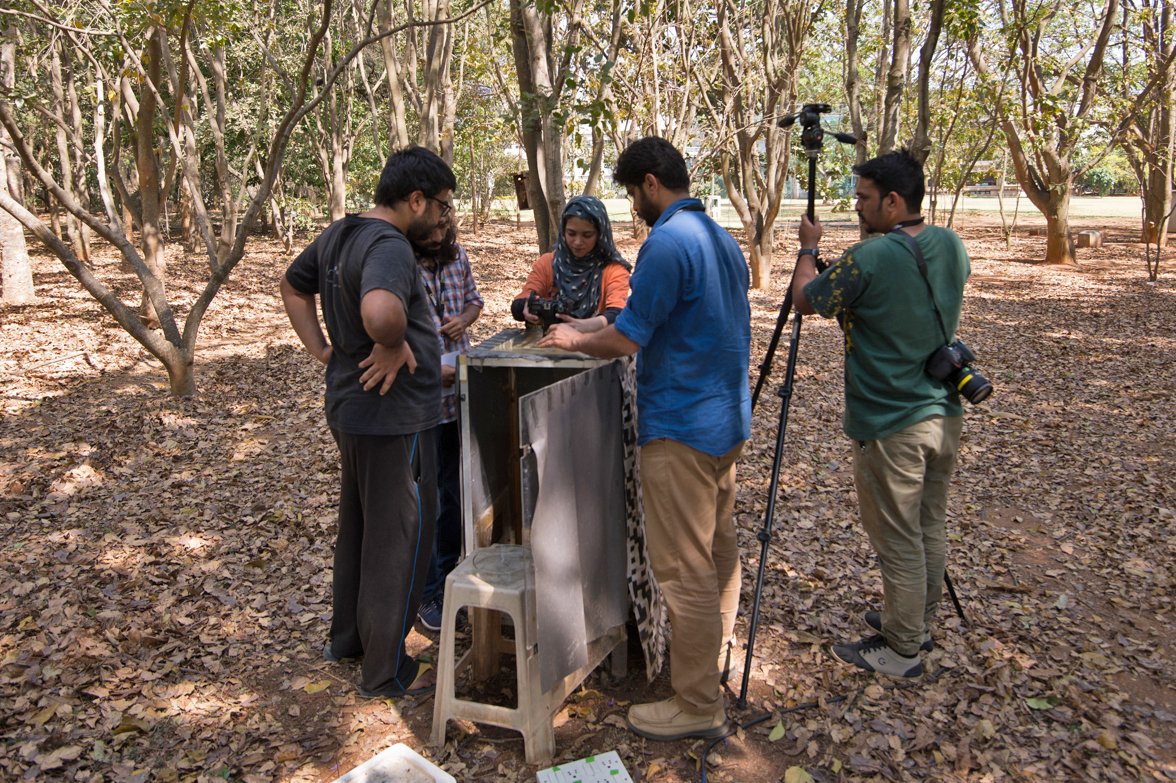 Not all science happens within the confines of a lab. Here Yadav helps one of the teams capture termites using studio-like conditions in the field. Image credit: Shoot for Science 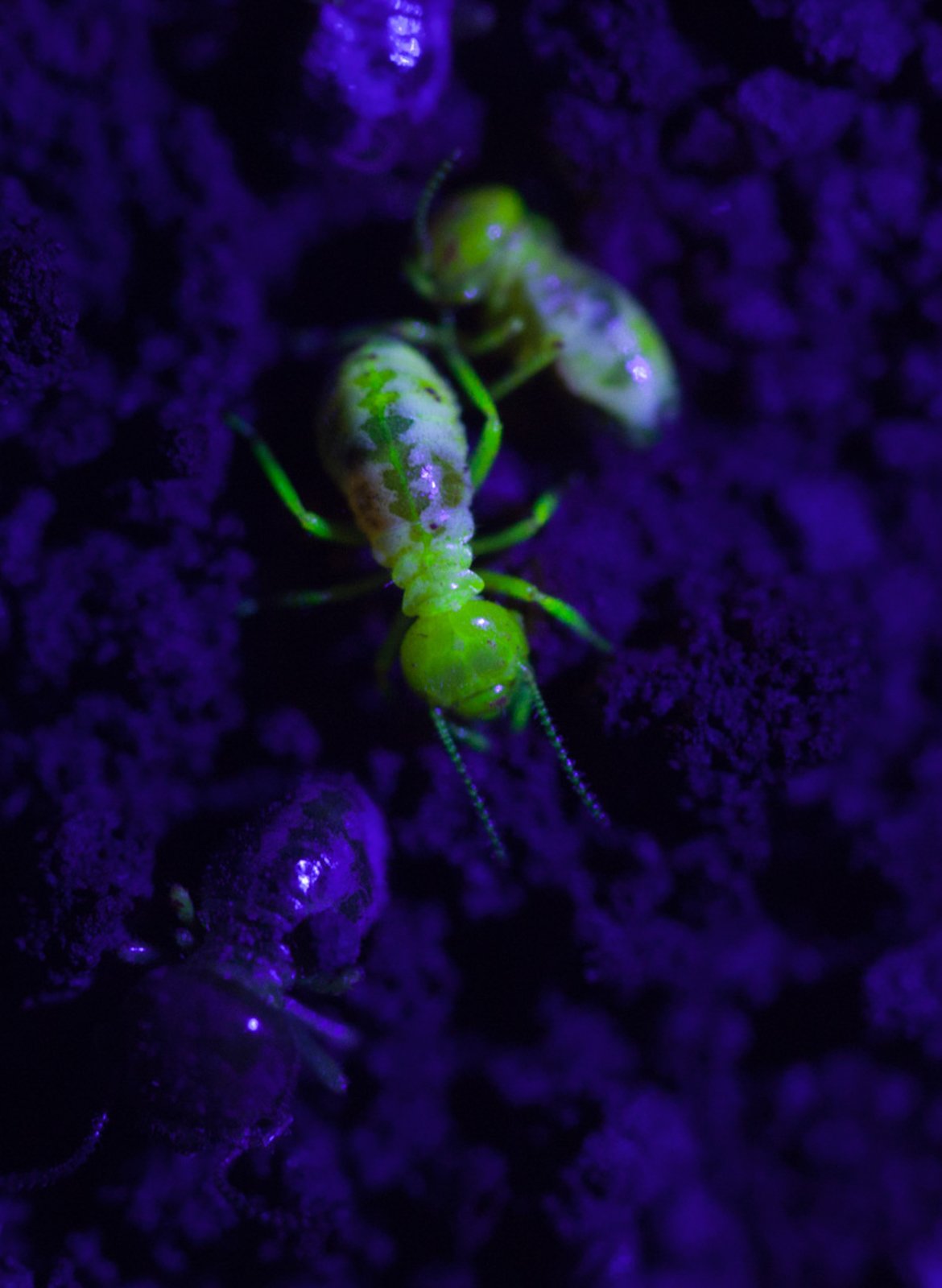 Using water labelled with green fluorescent dyes, scientists in the Sane lab track termites and study how they modulate the moisture content of the soil, making it better suited for their building needs. Image Credit: Team Sane 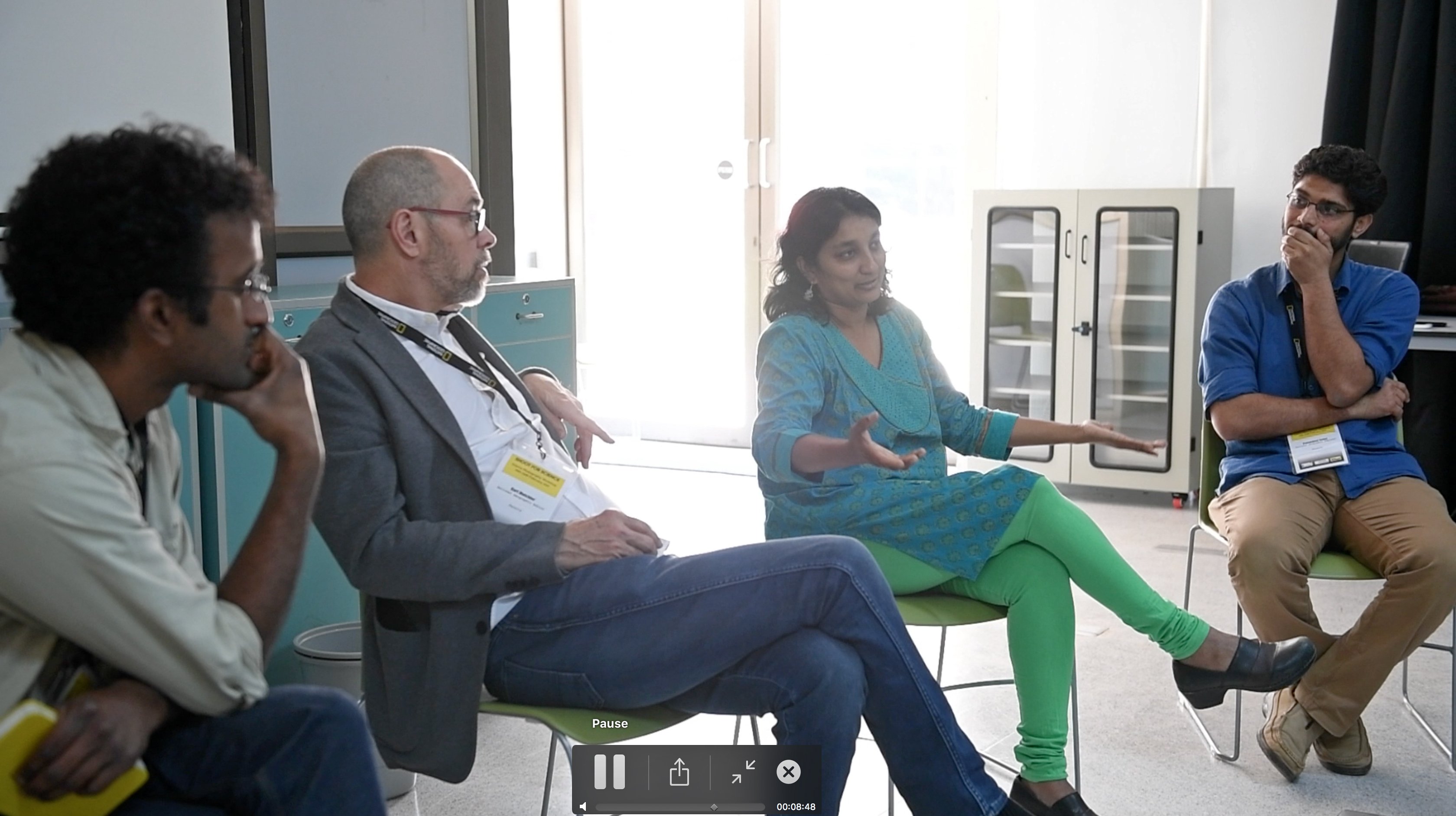 How much image manipulation is permissible? Is it ok to remove even minor and irrelevant distractions for better image composition or to hone in on the story? Many such contentious questions were raised and tackled in the ethics session. Kurt Mutchler provided an editorial viewpoint—what publications, in particular NatGeo, permitted. Uma Ramakrishnan, a molecular ecologist, was the scientists’ voice. The questions challenged Mutchler in spite of having pondered questions on ethics over a 25-year long career as a science photographer and editor. What emerged from this very relevant and important session was that there may not be right and wrong answers. However, it is vital is encouraging open discussion and debate about ethics in order to incite scientists and communicators to be aware, to introspect and to formulate personal and publishing guidelines that they revisit and revise as they go through their careers. Image Credit: Shoot for Science 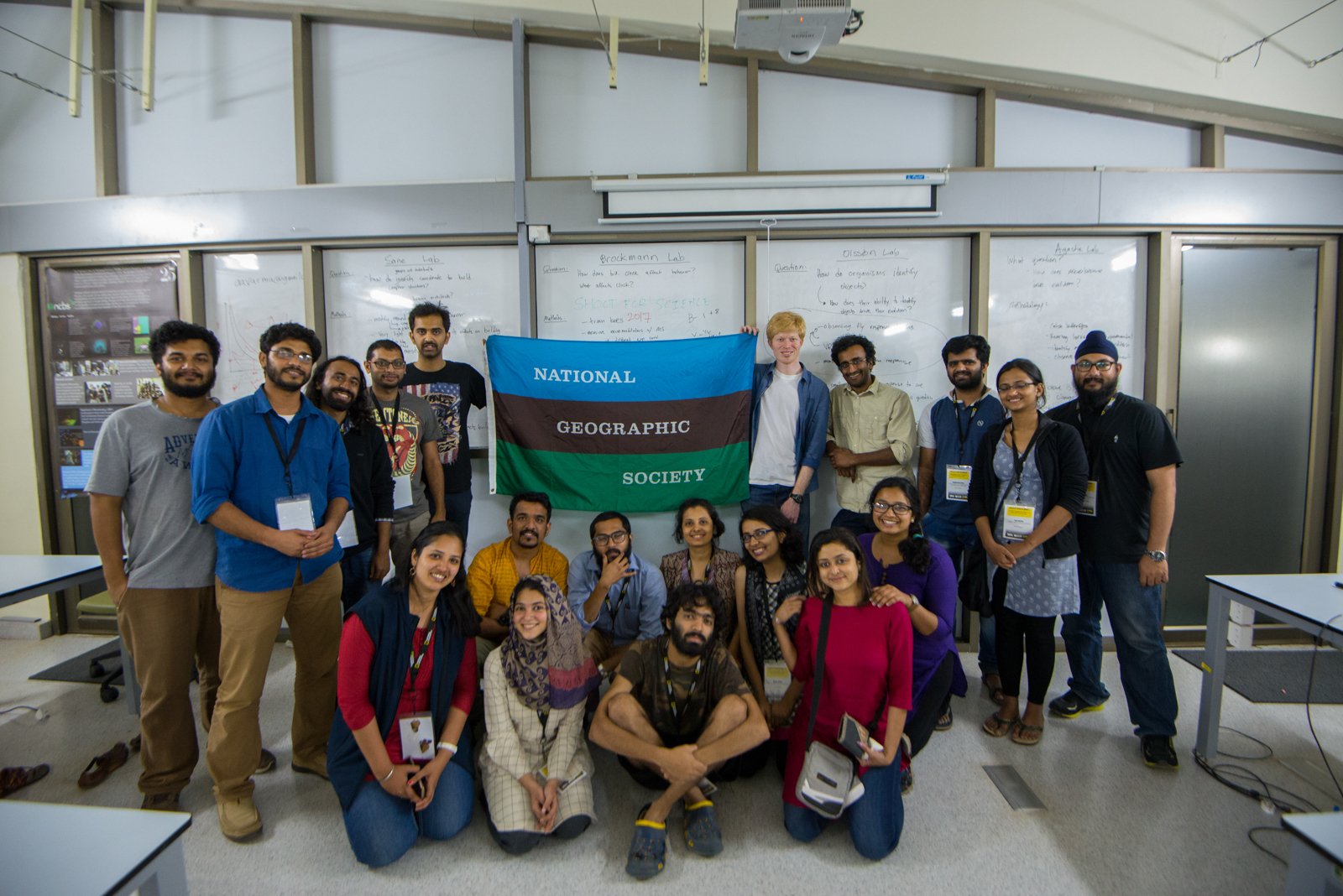 Shoot for Science was an intense course. The participants had a steep learning curve to climb. They took the challenge head-on, clocking long hours in the studio brainstorming together and honing their images and collaborating to create that perfect shot. ”It was a great learning experience. Starting from how to think of communicating a story to how to use a camera, it was all new to me,” said participant Ipsa Jain who had previously only used mobile cameras.

It was heartwarming for the organisers to see how seriously they took their assignments and very often, they were pleasantly surprised by their dedication and the quality of the work the teams produced. They hope to sustain this effort and empower a quorum of scientist-photographers in India, who through their images, can inspire young students aiming to take up science and science communication as careers.

This is a companion discussion topic for the original entry at https://indiabioscience.org/columns/indian-scenario/through-the-lens-using-photography-to-tell-science-stories