We have the means, today, to transplant entire hands: rather than using prosthetics, individuals who lose their limbs can gain new living ones. Such surgery remains very rare, however, and for a good reason: the risks far outweigh the benefits. The immune system is likely to rebel against the foreign object, and long-term global suppression of the immune response is far more damaging to the body than an artificial replacement limb.

But what if immunosuppressants could target only affected tissue—as and when an immune response flares up? That degree of precision in medical treatment, drugs riding the bloodstream to hone in on a specific destination, has been the subject of science fiction in the past. But drug delivery systems have improved since pioneering work in the field of biomaterials in the 1980s and 1990s. Recent collaborative work, for example, that included Praveen Vemula’s lab at the Institute for Stem Cell Biology and Regenerative Medicine (InStem), Bangalore, has improved the success of limb transplants in animals models, by designing immunosuppressant-laden hydrogel packets which selectively degrade upon contact with the inflammation that signals an immune response. The desired effect, says Vemula, is to have something like a tiny pharmacist within the body, doling out medicine as and when required.

Biomaterials research covers a wide swathe of disciplines and topics, from nanotechnology to immunology to mechanical engineering. The common thread that binds these together is the study of materials that go inside the body, typically for medical reasons. Surprisingly, the influence of materials research on this area is fairly recent. That particular melding of disciplines was given an initial impetus by Robert Langer in the late 1970s, who saw the potential that his chemical engineering background could have on design questions in medicine. Prior to that, clinicians had come up with inventive design solutions based on what they saw around them: according to Langer, the flexible material used for artificial hearts were initially based on ladies girdles, for example. But Langer tried tackling medical research questions from the perspective of an engineer: what material properties would be most useful, in terms of facilitating drug delivery or the rebuilding of tissues? He designed polymer structures in the late 1970s that allowed, in theory, the slow release of drugs to localised regions of the body—an idea that has been applied in clinical treatment of brain cancer since 1996, and has been built upon by many other labs across the world in the intervening decades.

For Vemula, the excitement of biomaterials research comes from finding solutions to unmet clinical needs. Having the clinic as the final destination gives an engineering problem specific constraints: the final product must be safe for the human body; it must scale up well to be both cost-effective and amenable to mass-production. “Anything you take from the concept to clinical level takes multiple years and a lot of effort,” he says. Thus one must keep parameters like biocompatibility in mind from the very beginning. It also helps to have a proven “platform technology” which can be modified for application to multiple areas. 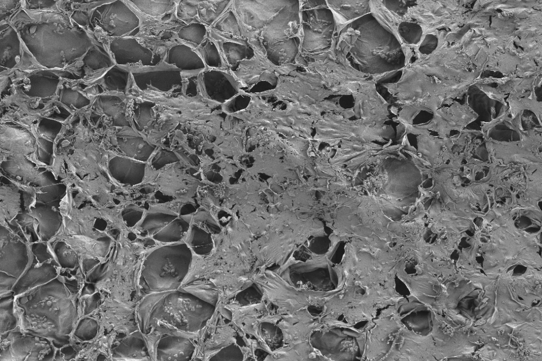 A platform technology that Vemula’s lab at inStem uses is a hydrogel that breaks down in the presence of inflammation. A hydrogel is a network of interlinked polymers or of self-assembled small molecules that absorbs water without dissolving within it, maintaining a gel-like, colloidal state between solid and liquid. The permeability of this network can be tweaked, such that drugs embedded inside might be allowed to diffuse out slowly, or not at all. Here, the injected drugs remain dormant in the absence of an external stimulus—in this case, an inflammation-associated enzyme that degrades the encapsulating structure over time.

Inflammation is a natural response of the body to multiple kinds of environmental insult, but can be damaging if taken to excess. The applications of a drug delivery system that can specifically target excess inflammation are therefore numerous: Vemula’s lab is presently working with clinicians towards improving the success of organ transplants, as well as developing treatments for ulcerative colitis, which involves inflammation of the lining of the digestive tract. They are also working on the treatment of rheumatoid arthritis, which involves periodic, debilitating inflammation of the joints.

Although biomaterials research is presently growing in India, with multiple labs working on drug delivery systems and tissue regeneration technologies, the field has a much longer history in the country. In 1974, a biomaterials research centre was established at Trivandrum that would ultimately be known as the Sree Chitra Thirunal Institute for Medical Sciences and Technology (SCTIMST). The institute’s first director was M. S. Valiathan, a protege of surgeon Charles Hufnagel, who had in 1952 implanted the first successful artificial heart valve in a human. Valiathan worked with others at SCTIMST to develop a heart valve that would serve as a low-cost alternative to foreign imports, and spent twelve years working through multiple iterations with different materials. By 1990, the team developed what is now called the TTK Chitra Heart Valve, still used today. Other devices developed since the 1980s have included a PVC blood bag, a membrane oxygenator that can be used during open heart surgeries, and a hydrocephalus shunt that can be used to drain excess cerebrospinal fluids.

The diverse kinds of research that have emerged from SCTIMST demonstrate the tricky collaborations required for translating biomaterials research into practical applications. These collaborations are cross-disciplinary to begin with, between researchers sharing insights from separate specialities, but also involve close work with clinicians and finally link-ups with industries capable of marketing and mass-production. Harikrishna Varma, who works at SCTIMST on developing bone graft materials from synthetic calcium phosphates, emphasises that his research is always focused on its ultimate use in the clinic. “You have to work closely with [clinicians], and [see] what type of things they require,” he says.

Collaboration across widely disparate disciplines does not come naturally to all researchers, however, let alone working together with clinicians and people in industry. “Each step is a completely new way of working,” explains Vemula. “It will keep pushing you out of your comfort zone.” The key to successful translational research is to find the right people to work with, he says, and accept from the start that no one person can be an expert on all topics. Vemula’s lab works together now with clinicians at AIIMS and CMC Vellore, as well as with several other labs in the US and Switzerland. The ecosystem for scientists who would like to do translational research in India has improved vastly in the last decade, according to Vemula—at least in pockets—with specialised schemes such as BIRAC, developed by the Department of BioTechnology (DBT).

But those pockets may be isolated. Sourabh Ghosh, who researches silk-based tissue engineering at IIT Delhi, points out that the system in India could be made more streamlined and transparent. Someone just starting out may have difficulty navigating the rules and regulations that lie between developing a technology in the lab and actually seeing it reach human trials, let alone bear fruit in the clinic. The process can take decades, points out Ghosh. In one case, a male infertility gel developed at IIT Delhi by Prof Sujoy Guha has taken thirty years to progress from initial research to the completion of human clinical trials. And in the end, clinics in India may continue to prefer more expensive devices imported from abroad. “The Chitra Heart Valve is a fantastic example of a biomaterial developed in India,” says Ghosh. However, he has spoken to doctors in Delhi who are telling patients to purchase expensive heart valves from Germany and the UK. Ghosh says that stronger links between research, industry and clinics are required.

In the meantime, the research side of biomaterials is growing in India, expanding technologies that could be platforms for new applications in the future. Kaushik Chatterjee at the Indian Institute of Science, Bangalore works on developing new materials for orthopaedics: materials that could be used to replace joints or fix fractures on the one hand, or that could serve as a scaffold for bone tissue to regrow on the other. If a section of the skeletal structure is lost or needs to be strengthened, one option is to augment it: with a bone-like ceramic material, as in Harikrishna Varma’s lab, or with a strong, biocompatible metal like titanium, in Chatterjee’s lab.

Another option, explains Chatterjee, is to create a porous scaffold that mimics the lost structure in shape, and which slowly degrades as cells grow around it. Here, again, one has a complex materials problem: depending on the tissue, the material must be strong enough to be load-bearing and malleable enough that it can take a prescribed shape, with an internal fibrous structure that encourages stem cell growth while discouraging bacteria. The materials must degrade at a rate that matches tissue regeneration, with degradation products that enter the rest of the body without negative effects.

“You want it tailored,” says Chatterjee, “so we constantly work on new polymers.” One strategy that his lab uses is to develop vegetable oil-based polymers, with the idea that these are more likely to be non-toxic. The material can then be shaped in multiple ways, including 3D printing.

The field of tissue engineering has far to go, however, emphasises Chatterjee. Today, clinical applications are restricted to skin grafts, due to their relative structural simplicity. But non-clinical applications also exist. Sourabh Ghosh’s lab is working to adapt their tissue engineering research to develop 3D bioprinted in vitro disease model systems that can be used for medical research. Such model systems could potentially speed up medical research by producing immediate results that are applicable to humans, while making animal models unnecessary. Ghosh’s lab is working with pharmaceutical companies to develop micro-environments for drug testing that mimic osteoarthritis, as well as the skin autoimmune disorder, psoriasis. The lab is also working with Indian cosmetics companies that are searching for alternatives to animal models. Again, this is a nascent field: “In the future, maybe we can also make patient-specific disease model systems by 3D bioprinting,” says Ghosh.

Vemula feels that translational research has grown more feasible in India in recent years thanks largely to a change in mindset, and to bold steps taken by science and administration leaders. “A decade back, an academician forming a company and taking this further was almost taboo. But now it is a much more welcoming situation where there are many academicians encouraged to take their technologies forward and partner with industries.” The right infrastructure to convert research into practical applications may still only exist in islands, but it has the potential to grow.

This is a companion discussion topic for the original entry at https://indiabioscience.org/columns/general-science/biomaterials-research-in-india-from-tissue-regeneration-to-drug-targeting-technology